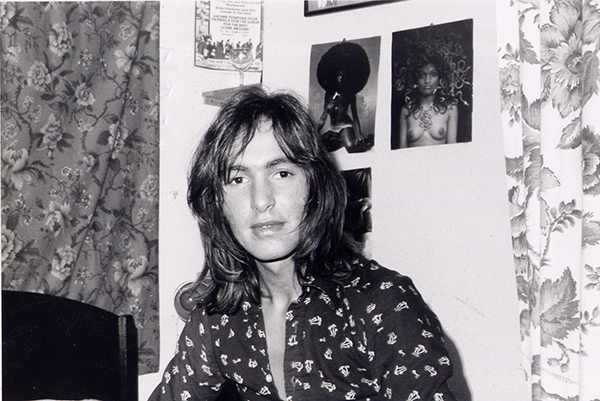 I had to think of a suitable film for this song - it wasn’t that difficult. As it so remined me of my teenage years. I was actually homeless myself for a brief period in my late teens – (early photos of me (depicted in the video and shown above) as an 18-year-old sums up how lonely I was!) so I could easily relate to the words Bob Dylan wrote. I too slept in squats or bedsits yes even the odd bench sharing the floor or squats of musician friends who I mixed with and if I got lucky a sofa for the night or a blanket. One must remember in the early 60s most of us up and coming musicians were frowned upon anyway and we were seen as long-haired dropouts – a nuisance to society (how things have changed!) I vividly remember being very lonely and hungry most of the time whilst struggling to keep body and soul together my best friend being my guitar.

I lived alone in various single rooms in houses when I could afford it and the gigs just covered the cost. Man, I felt so isolated and alone Like a Rolling Stone.

So, I chose to mirror how wretched I used to feel during those troubled years of my life in the film accompanying this song. My true mates were my band members but half of them had the same problem in those days.

The Rolling Stones themselves lived a similar life when starting out, sharing a dirty flat in Edith Grove in London. They too were freezing and most of the time they went hungry (Keith Richards described it as a 'beautiful dump'). So, I was in similar company. In fact, when Brian Jones (founder member of the Rolling Stones) moved in with them from Cheltenham his pal went along with him named Dick Hattrell and often helped them out financially in fact Dick is clearly mentioned in Keith Richards’ book “Life”. I know many stories about how poor Dick used to get treated as he told me so himself. Having formed a successful band in the late 90s one of my backing singers was in fact Brian Jones’ girlfriend Pat Andrews and mother of Brian’s son – Mark. She toured with my band for approximately 4 years before moving on. So, I heard it not only from Pat Andrews but from Dick Hattrell who was always at one of our gigs. And Brian’s son Mark would pop down to watch his Mum on stage and see the band which he loved (he looks the double of his Dad).

In 1999 we performed at Cotchford Farm, Hartfield on the 30th anniversary of Brian’s demise.  This particular gig gained world-wide coverage then my band were featured in a book about Brian Jones written by Allan Clayson – ‘60s music aficionado.

Anyway, for an 18-year-old it was tough, very tough.  For those reading this it is the first time in my life that I’ve ever opened up and shared my tough times. And those finding themselves in a similar situation now, whether it be loneliness, homelessness, my advice is this: however difficult life may seem at the moment it will get better even if you don’t think it will. Keep your faith in God whatever you perceive him/her to be. To conclude I was recently on my way back from the studios in Brighton when a girl in a shop doorway asked me to buy her a can of coke. I asked her if she was hungry – she was so as well as a can of coke I took her for a full English breakfast and during that short time I spent with her she told me that she was on the streets because of her horrible abusive father. So, when you see a homeless person try not jump to an obvious conclusion they too have their stories.

My first band was called America and I was a damn good bass guitarist but as I said we often got paid crap money like most other bands – including the Stones and the Beatles – our first reasonable gig was supporting Supertramp at Worthing Assembly Halls.